The World Is Still A Beautiful Place Because It’s Alive

“The deeper we look into nature, the more we recognize that it is full of life, and the more profoundly we know that all life is a secret and that we are united with all life that is in nature.” 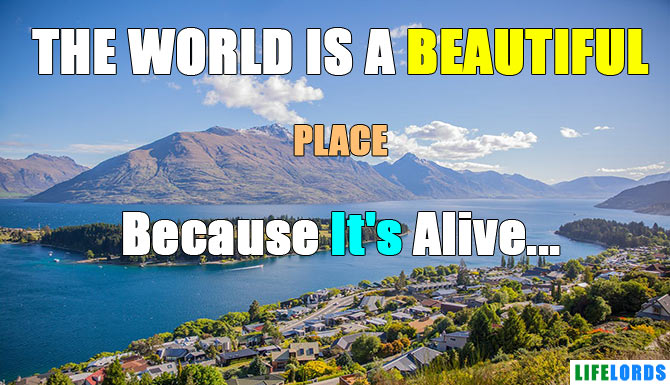 What is this world? What are you? What brought the world into being? Is it a vast machine? Is it an accident? Has the world always been here? Or did something make it – or somebody? It is all just the result of natural processes – and what does that mean? Have you never asked such questions? For answers, to whom have you turned – to scientists, to philosophers, to revelation?

Truth Is Self-evident and Everyone Has Access To It

Truth is not something God has reserved for the learned only. Truth is not something God has kept from us until we could invent machines to track it down. I believe my cat has as much access to truth as I do – and finds it too. Only he expresses it in cat terms and relates it to cat needs. I believe amoebas find the truth. They express it in amoeba terms; that is all.

Truth is constantly, persistently, insistently, overwhelmingly seeking to express itself, seeking to give itself to us. It presents itself before us in ten thousand forms and faces; it speaks to us in tongues; dances under our fingers; undulates under our feet; presses itself against us; flings itself oper us; coils itself around us. “Take me. Know me. Experience me.” truth cries. It burns in our flesh.

It wings through our thoughts. It prods us with visions and dreams. It speaks from every atom of our world and every moment of our life. Everything is trying to tell us what it is. Everything is trying to tell us what we are. Truth is a diamond with ten thousand facets, and life would have you look through them all. So I say to you; look at yourself.

The World Is Not A Machine – It’s Alive Every Moment

Look At The World Around You To Understand It

Look at the world around you. You do not even have to look deep. Look at the surface of things. That is enough. Go to the window and look. ‘what do you see’? Sky, clouds, trees, grass, buildings, streets, living creatures dating here and there – colors, shapes more various than any you can see in a kaleidoscope, all changing all the time, grouping, regrouping, never twice the same.

One thing the briefest look will tell you: The mechanists – behaviorists – materialists – naturalists – whatever they may call themselves who call the world and themselves a machine – these are wrong. They are as wrong as human beings can be wrong. And this – because they are not machines – is very, very, wrong.

Whatever the world came out of, this Whatever is alive. Whatever it is that made the world, the world that describes Him worst is the machine. I say Him because the word I like best is God and I learned to think of God like Him. I cannot believe you can look out a window and think you are looking at a machine – or that it came out of a machine.

What you see out there is as unlike machinery as anyone can conceive. If there is anything it does not make you think of, it is gears, wheels, pulleys, belts, motors, electrical circuits, computers, and mills stamping out finished products at a fixed and steady rate, over and over, over and over.

The World Is Changing Continuously

The nature of a machine is that it repeats itself. Set it in operation and it will everlasting or until it breaks down – stamp out exactly, repeatedly whatever it is set to stamp out. What you see out there never repeats itself. This is one thing it does not do – repeat itself. Look. Look away. Look again. Everything you are looking at has already changed.

What you see out there changes like the changing wind – blows here, there, everywhere. Whatever It is that made, It has never made two moments alike. Not two snowflakes, two thumbprints. Out there is a bird. It perches on a bough, sings, leaps, perches on another bough, flutters down to peck at a seed, preens, cocks its head, flies up to a bough again, flies away.

May or may not fly back. Another bird may, after a while. And again it may not. Out there are bees buzzing in the clover sipping this blossom, spurning that, wallowing in golden pollen, zooming upward, gliding downward, banking, diving, hovering, clutching, flying off, returning.

Do You Know Why This World Is So Beautiful

Out there is a tree. Nothing stands for life more than a tree; nothing is a better symbol of the world. A tree grows down into the earth; a tree grows up into the sky. It sends out roots and branches everywhere, an almost inconceivable network of them, up, down, out, in, horizontally, vertically, crisscrossing, overlapping, circling, no two alike, almost a pattern of disorder, of random, irregular, haphazard growth, of absence of design – yet nothing is more a part of nature’s order than a tree.

Tranquil, breathing, resting, growing, responding effortlessly to the ebb and surge of the seasons, a tree is a life and a perfect expression of life. Whatever It is that made this tree of life is alive. When you think about the world around you, what thoughts come to your mind?

You know that you are under the law. Cause and effect are at work in your life. You know that many of the things that happen to you are determined by things that have gone before. Certainly, you cannot look out at the world without having a sense of order.

The World Is An Orderly World Run By Laws

But you cannot look out without having a sense of disorder too. You cannot think of course; without feeling that you are free. Just as good a term as cause and effect, to describe why things happen as they happen to happen, is freedom. One time I heard a chemist say that in every chemical reaction there comes a moment when things could just as easily go one way as the other – only they do not choose to.

The world is an orderly world. It is run by laws. But it is also a random world, altogether original, various, unpredictable, perpetually bringing off surprise, constantly delighting in its own inventive play. The world is not a machine. It is a world alive. And ‘Whatever It is that made it is alive”.

“We can’t command Nature except by obeying her.”