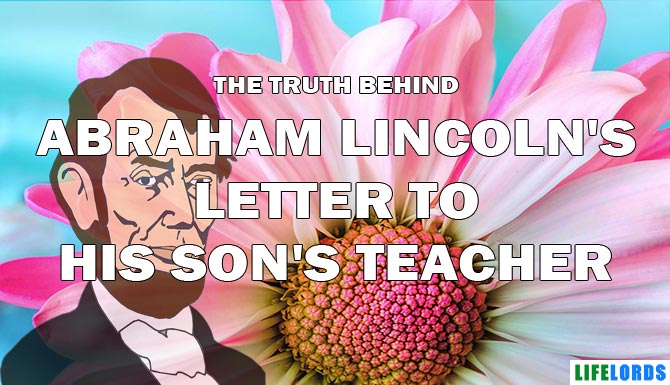 The Truth Behind Abraham Lincoln’s Letter To His Son’s Teacher: A charming letter titled ‘Abraham Lincoln’s Letter to His Son’s Teacher’ has been widely circulating on the Internet for some time. It is supposed that Mr. Lincoln wrote this letter (during his presidential term) to his son’s teacher on the day the boy started school. Undoubtedly, there is a bit of wisdom in the letter which can inspire everyone. But the real problem with this letter is – it’s not authentic.

Yes, You read it right. Abraham Lincoln’s ‘Letter to His Son’s Teacher’ is Totally Fake. Many Historians and Experts including Christian McWhirter and Samuel Wheeler, who have deeply researched Lincoln’s life confirm this letter is completely fake. There is no proof that Mr. Lincoln ever wrote such a letter.

You can read more about the authenticity of this letter in Jon Miltimore’s Post who has done a fantastic job by bringing out the real truth behind this letter. Now, most of you will ask, why are we sharing a fake letter? Because this letter contains some inspiring words of wisdom which everyone should read. It has a deep hidden message for every parent and teacher who is responsible for shaping a child’s destiny.

You May Also Like: 62 Best Father’s Day Gifts For Dad From Daughter & Son

A Father’s Letter To His Son’s Teacher With Image

My son starts school today. It is all going to be strange and new to him for a while and I wish you would treat him gently. It is an adventure that might take him across continents. All adventures that probably include wars, tragedy, and sorrow. To live this life will require faith, love, and courage.

Teach him if you can that 10 cents earned is of far more value than a dollar found. In school, teacher, it is far more honorable to fail than to cheat. Teach him to learn how to gracefully lose, and enjoy winning when he does win.

What Teachers And Parents Need To Know About

Teach him if you can the wonders of books, but also give time to ponder the extreme mystery of birds in the sky, bees in the sun, and flowers on a green hill. Teach him to have faith in his own ideas, even if everyone tells him they are wrong.

Try to give my son the strength not to follow the crowd when everyone else is doing it. Teach him to listen to everyone, but teach him also to filter all that he hears on a screen of truth and take only the good that comes through.

Teachers Should Nurture The Kids Carefully

This is the order, teacher but see what best you can do. He is such a nice little boy and he is my son.

We hope you would like the wisdom concealed in this inspiring letter. If applied correctly, these words have the potential to glorify the life of every child of this world. However, always remember this blatant fact – Most of the stuff on the internet is fictitious.

More On Lifelords: 201 Happy Birthday Quotes For Your Beloved Ones