Adam And Eve Bible Story For Kids: The story of Adam and Eve is one of the oldest and most familiar myths of the Judeo-Christian culture. This story has been mentioned in the Book of Genesis of the Hebrew Bible from chapters one through five. This story examines what is wrong with our relationship to the creator of the universe (God). 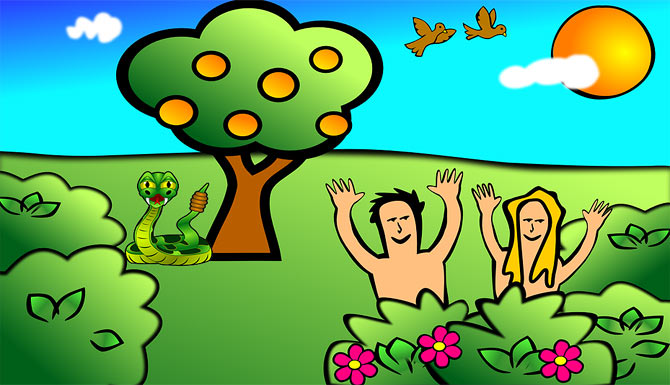 There are two stories of Adam and Eve. In one, God creates everything else, then ‘a man’, Adam. He then takes a rib from the man and creates Eve. In the second one, Adam and Eve are created together, at the start, before God creates anything else.

Both are important and definitely communicate that these stories are allegorical, not literal, as both cannot be the literal truth. The collectors of the stories in the Bible knew that this was important, in choosing which writings to collect together.

The story of Adam and Eve also provides the basis for the doctrines of the fall of man and original sin that are important beliefs in Christianity, although not held in Judaism or Islam. This story is often depicted in art, and it has had an important influence on literature and poetry.

Read More Stories: 15 True Scary Stories To Tell In The Dark For Kids

How The Almighty God Created This Beautiful World

Now no shrub had yet appeared on the earth and no plant had yet sprung up, for the Lord God had not sent rain on the earth and there was no one to work the ground, but streams came up from the earth and watered the whole surface of the ground. Later Almighty God created the trees, flowers, and all vegetable life; and all animals, birds, fishes, and insects.

Then God took some clay from the ground and made the shape of a man. Then He breathed gently into his nostrils the breath of life, and the man’s eyes opened. Thus the first human being came into existence. The name of the first man was Adam and God loved him very much. He gave Adam soul and life so that he could take good care of the earth.

Amazing Story About Adam And The Garden of Eden

He made a beautiful garden called the ‘Garden of Eden’, for Adam to live in which became his home. This garden was stunningly beautiful and was full of many wonderful things which are beyond the human imagination. It was full of beautiful flowers, mighty rivers, majestic mountain peaks, and evergreen trees.

The trees and vines were burst with sweet and juicy fruits like apples, oranges, mangoes, figs, and grapes. Adam used to ate this whenever he was hungry. He drank water from the river whenever he was thirsty. God blessed Adam and asked him to take care of the garden and everything in it.

He gave him total dominion over everything in it – including all of the fish, the birds, and every living thing that moved on the earth at that time. He brought them to the Adam to see what he would name them; and whatever the Adam called each living creature, that was its name. So the Adam gave names to all the livestock, the birds in the sky, and all the wild animals.

How God Made The First Woman: Adam & Eve Story

Adam spent all his days eating the fruits and playing with these birds and animals in his garden. But he was alone and sometimes felt quite lonely. After a certain period of time, God noticed the change in behavior of Adam. This made God really sad. He thought that it is not good that Adam continues to remain alone, he must need a companion like him. He needs someone to share his life with.

So God caused Adam to fall into a deep sleep; and while he was sleeping, He took one of his ribs and then closed up the place with flesh. Then God made a woman from the rib He had taken out of Adam. Thus God created the first woman Eve. Eve was different from Adam and so, God called her a woman.

He brought her to the Adam. When Adam awoke the following morning, he found a wife, Eve, lying asleep beside him. Adam was so happy. He took her hand and she woke up. She looked up at him and smiled. Adam and his wife Eve were both naked, and they felt no shame. Eve gave company to Adam and also helped him to take care of animals, birds, and the garden.

God put Adam and Eve in the Garden of Eden and ordered them to care for and nurture the land. He told Adam and Eve that they could eat from any fruit from the trees except for the tree of the knowledge of good and evil. God warned them that if they ate from the tree they would die.

How Serpent Seduced Adam And Eve To Eat The Fruit

God then allowed Satan himself to be able to roam in this garden in the form of a serpent – knowing full well that Satan would try and tempt Adam and Eve to disobey His direct command not to eat any fruit of this one forbidden tree. One day, Adam and Eve were gathering fruits for dinner when Eve heard a silken voice behind her. It was Satan who came disguised as a serpent and spoke to Eve. And the Serpent was more crafty than any of the wild animals the God had made.

He said to Eve, “Did God really say you must not eat from any tree in the garden?” Eve turned around to see who was talking to her. Then she said to the serpent, “God has told us we may eat all the fruit from the trees in the garden, except for the fruit that grows on the tree of the Knowledge of Good and Evil, that is in the middle of the garden.

He also said, “You must not touch it, or you will die.” Oh, how silly you are! You will not certainly die if you would eat such a lovely fruit,” the serpent lied to Eve in a tempting tone. “For God knows that if you eat the fruit from the tree of good and evil, your eyes will be opened, and you will be like God and will be able to decide for yourself what is right and what is wrong.”

You May Also Like: How To Become Successful In College

Wonderful Bible Story of Adam And Eve For Toddlers

The Tale of Adam, Eve and The Serpent: A Bible Story

When Eve saw that the fruit of the tree was good for food and pleasing to the eye, she thought how wonderful it would be to be as wise and powerful as God. Eve believed the serpent’s lie and took a bite of the fruit. She then gave some to her husband Adam, who was with her, and he ate it too. As soon as they ate the fruit a change came over Adam and Eve. Earlier they were as innocent and pure as little children.

But now, they became unhappy and fearful of God. This act gives them additional knowledge, but it gives them the ability to conjure negative and destructive concepts such as shame and evil. Before this, Adam and Eve had been happy when God was near, but now knowing that they had sinned, immediately felt ashamed and tried to hide from God.

One day they heard the sound of God as he was walking in the garden in the cool of the day, and they hid themselves from the Lord among the trees of the garden. Then God called to Adam and Eve and said, “Where art thou?”

They dived into the bushes and sewed fig leaves together to cover up their naked body. But God knew where they were. He asked Adam, “Why are you trying to hide from me?” Adam answered, “I heard you in the garden, and I was afraid because I was naked; so I hid.”

Why God Expelled Adam And Eve From The Eden

And God said, “Who told you that you were naked?” When God asked them if they had eaten from The Tree of the Knowledge of Good and Evil, they blamed each other for their sins. God was sad and angry because Adam and Eve had disobeyed him. He prophetically tells the woman and the man what will be the consequences of their sin of disobeying God. He rebuked them for the evil they had done.

And then drove them out of the Garden of Eden, placing an angel to keep watch over the gate so that they could not return. God punished Adam and Eve by sending them to the earth. He told them, “From now on you have to work very hard for everything you want. Nothing will come easily. And you could not be able to enjoy immortal life. Finally, one day, you will die.”

For Adam, God decided that he would grow food and make clothes whereas, for Eve, He decided that she would suffer the pain of giving birth. Thus they sinned, and sin came into the world. Later God curses the serpent and the ground too.