Famous Short Stories That You Will Always Remember

Famous Short Stories That You Will Always Remember: Today we are going to share some famous short stories that will be equally beneficial both for kids and adults. All these stories are real and more than a hundred years old. However, in spite of being historic, they are still meaningful in the present era. 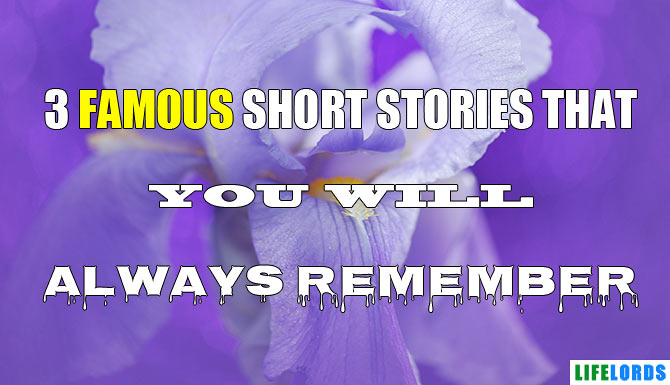 The values, beliefs, and morals imparted by these didactic stories for kids are the foundations of our personalities. We hope these stories will surely entertain you and your kids and help them to learn moral values in a very short time.

1. Famous Story of King Bruce of Scotland & The Old Woman

What Happened With King Bruce After He Lost The Battle

What boy or girl has not heard the story of King Robert Bruce and the spider? I will tell you another story of the same brave and famous king. He had fought a battle with his enemies, the English. His little army had been beaten and scattered. Many of his best friends had been killed or captured. The king himself was obliged to hide in the wild woods while his foes hunted for him with hounds.

For many days he wandered through rough and dangerous places. He waded rivers and climbed mountains. Sometimes two or three faithful friends were with him. Sometimes he was alone. Sometimes his enemies were very close upon him. Late one evening he came to a little farmhouse in a lonely valley. He walked in without knocking. A woman was sitting alone by the fire.

“May a poor traveler find rest and shelter here for the night?” he asked.

The woman answered, “All travelers are welcome for the sake of one and you are welcome.”

“Who is that one?” asked the king.

Read More Stories: 15 True Scary Stories To Tell In The Dark For Kids

Story of A Brave Old Woman Who Helped A Needy King

“That is Robert the Bruce,” said the woman. “He is the rightful lord of this country. He is now being hunted with hounds, but I hope soon to see him king over all Scotland.”

“Since you love him so well,” said the king, “I will tell you something. I am Robert the Bruce.”

“You!” cried the woman in great surprise. “Are you the Bruce, and are you all alone?”

“My men have been scattered,” said the king, “and therefore there is no one with me.”

“That is not right,” said the brave woman. “I have two sons who are gallant and trusty. They shall go with you and serve you.”

So she called her two sons. They were tall and strong young men, and they gladly promised to go with the king and help him.

How The King Again Reclaimed His Lost Kingdom

The king sat down by the fire, and the woman hurried to get things ready for supper. The two young men got down their bows and arrows, and all were busy making plans for the next day. Suddenly a great noise was heard outside. They listened. They heard the tramping of horses and the voices of a number of men.

“Be brave, and defend your king with your lives,” said their mother.

Then someone outside called loudly, “Have you seen King Robert the Bruce pass this way?”

“That is my brother Edward’s voice,” said the king. “These are friends, not enemies.”

The door was thrown open and he saw a hundred brave men, all ready to give him aid. He forgot his hunger; he forgot his weariness. He began to ask about his enemies who had been hunting him.

I saw two hundred of them in the village below us,” said one of his officers. “They are resting there for the night and have no fear of danger from us. If you have a mind to make haste, we may surprise them.”

“Then let us mount and ride,” said the king.

The next minute they were off. They rushed suddenly into the village. They routed the king’s enemies and scattered them. And Robert the Bruce was never again obliged to hide in the woods or to run from savage hounds. Soon he became the real king and ruler of all Scotland.

You May Also Like: Most Famous Poems From The Greatest Poets of All Time

2. Famous Real Story of A Prince Who Learned To Read

Famous Story of The King of England – Alfred The Great

A thousand years ago boys and girls did not learn to read. Books were very scarce and very precious, and only a few men could read them. Each book was written with a pen or a brush. The pictures were painted by hand, and some of them were very beautiful. A good book would sometimes cost as much as a good house. In those times there were even some kings who could not read.

They thought more of hunting and fighting than of learning. There was one such king who had four sons, Ethelbald, Ethelbert, Ethelred, and Alfred. The three older boys were sturdy, half-grown lads; the youngest, Alfred, was a slender, fair-haired child. One day when they were with their mother, she showed them a wonderful book that some rich friend had given her.

She turned the leaves and showed them the strange letters. She showed them the beautiful pictures and told them how they had been drawn and painted. They admired the book very much, for they had never seen anything like it.

Know How A Mother Can Change The Life of Her Child

“But the best part of it is the story which it tells,” said their mother. “If you could only read, you might learn that story and enjoy it. Now I have a mind to give this book to one of you.”

“Will you give it to me, mother?” asked little Alfred.

“I will give it to the one who first learns to read in it” she answered.

“I am sure I would rather have a good bow with arrows,” said Ethelred.

“And I would rather have a young hawk that has been trained to hunt,” said Ethelbert.

“If I were a priest or a monk,” said Ethelbald, “I would learn to read. But I am a prince, and it is foolish for princes to waste their time with such things.”

“But I should like to know the story which this book tells,” said Alfred.

An Inspiring Story That Tells How Greatness Is Achieved

A few weeks passed by. Then, one morning, Alfred went into his mother’s room with a smiling, joyous face. “Mother,” he said, “will you let me see that beautiful book again?” His mother unlocked her cabinet and took the precious volume from its place of safekeeping. Alfred opened it with careful fingers. Then he began with the first word on the first page and read the first story aloud without making one mistake.

“O my child, how did you learn to do that?” cried his mother.

“I asked the monk, Brother Felix, to teach me,” said Alfred. “And every day since you showed me the book, he has given me a lesson. It was no easy thing to learn these letters and how they are put together to make words. Now, Brother Felix says I can read almost as well as he.”

“How wonderful!” said his mother.

“You will be a good monk when you grow up,” said Ethelred, with a sneer. But his mother kissed him and gave him the beautiful book. “The prize is yours, Alfred,” she said. “I am sure that whether you grow up to be a monk or a king, you will be a wise and nobleman.”

And Alfred did grow up to become the wisest and noblest king that England ever had. In history, he is called Alfred the Great.

You May Also Like: 100 Success Tips To Walk On The Road To Success

3. Famous Short Story of King Charles And The Bomb

A King Who Was Famous For His Courageous Nature

Did you ever hear of King Charles the Twelfth, of Sweden? He lived two hundred years ago and was famous for his courage in defending his country. One day he was in the midst of a great battle. The small house in which he had taken shelter was almost between the two armies. He called to one of his officers and bade him sit down and write a short order for him.

The officer began to write, but just as he finished the first word, a bomb came through the roof of the house and struck the floor close by him. He dropped the pen and sprang to his feet. He was pale with fear. “What is the matter?” asked the king.

“Yes, I see,” said the king. “But what has the bomb to do with what I wish you to write? Sit down, and take your pen. When your country is in danger, you should forget your own safety.”

More On Lifelords: Short Kindness Quotes For Kids And Adults