Interesting Short Stories To Read And Tell To Your Friends

Interesting Short Stories To Read And Tell To Your Friends: These are some of the great interesting stories which will refresh your mood and mold your thought process. As these stories convey deep lessons you can use them to entertain your friends, colleagues, and relatives in your leisure time. You can even amuse your kids in the nighttime when they demand a new story just to quench their thirst for curiosity. 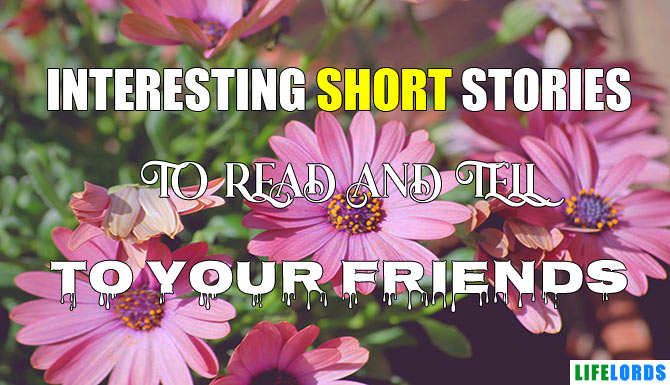 How The King Got To Know About The Problem of Carl

Many years ago there was a king of Prussia, whose name was Frederick; and because he was very wise and very brave, people called him Frederick the Great. Like other kings, he lived in a beautiful palace and had many officers and servants to wait upon him. Among the servants, there was a little page whose name was Carl. It was Carl’s duty to sit outside of the king’s bedroom and be ready to serve him at any time.

One night the king sat up very late, writing letters and sending messages; and the little page was kept busy running on errands until past midnight. The next morning the king wished to send him on another errand. He rang the little bell which was used to call the page, but no page answered.

“I wonder what can have happened to the boy,” he said; and he opened the door and looked out. There, sitting in his chair, was Carl, fast asleep. The poor child was so tired after his night’s work that he could not keep awake. The king was about to wake him roughly when he saw a piece of paper on the floor beside him. He picked it up and read it.

It was a letter from the page’s mother: ‘Dearest Carl, You are a good boy to send me all your wages, for now, I can pay the rent and buy some warm clothing for your little sister. I thank you for it and pray that God will bless you. Be faithful to the king and do your duty.’

A Beautiful Story That Tells Us Importance of Kindness

The king went back to the room on tiptoe. He took ten gold pieces from his table and wrapped them in the little letter. Then he went out again, very quietly, and slipped them all into the boy’s pocket. After a while, he rang the bell again, very loudly. Carl awoke with a start and came quickly to answer the call.

“I think you have been asleep,” said the king.

The boy stammered and did not know what to say. He was frightened and ready to cry. He put his hand in his pocket and was surprised to find the gold pieces wrapped in his mother’s letter. Then his eyes overflowed with tears, and he fell on his knees before the king.

“What is the matter?” asked Frederick.

“Oh, your Majesty!” cried Carl. “Have mercy on me. It is true that I have been asleep, but I know nothing about this money. Someone is trying to ruin me.”

“Have courage, my boy,” said the king. “I know how you must have been overwearied with long hours of watching. And people say that fortune comes to us in our sleep. You may send the gold pieces to your mother with my compliments, and tell her that the king will take care of both her and you.

Moral of The Story: Hard work and honesty bring the sweetest of fruits.

2. Interesting Story of A Merchant & The People of Ethiopia

Why Merchant Was Not Able To Understand The Human Emotions

An Arab Merchant came to know that the people of Ethiopia possessed silver in abundance. He thought of going there and merchandising. One day he departed for Ethiopia with onions loaded on hundreds of camels. The inhabitants of Ethiopia had never tasted onions before. They were extremely delighted on consuming it. They purchased all the onions and gave gold and silver in equal weight.

The trader was extremely glad. He returned to his native land as a wealthy man. Another merchant came to know about this. He too resolved to go to Ethiopia. He took with him camel-loads of even a better delicacy – garlic and headed towards Ethiopia. The inhabitants of Ethiopia danced with frolic on tasting garlic.

They took all the garlic, but the question arose as to what to give in return. They knew that they had ample silver and gold but thought that they had even better barter material than gold, i.e. onions. Thus they filled his camel sacks with onions.

The merchant was deeply disappointed, but what could be done? He returned home quietly with onions. The poor merchant was not able to understand what is the criterion of preciousness? He felt that all this is just a matter of belief of the respective mass minds.

Moral of The Story: We value a thing on the basis of our own beliefs and mindset.

Read More Stories: 5 Best Stories of Moses In The Bible

3. Interesting Stories With Pictures To Tell To Your Friends

Interesting Story of Saint Dadu And The Royal Messenger

The royal envoy had come to the village to meet Dadu Maharaj. He saw an old man clearing the thorns and rubbish on the roads near the village boundaries. The visiting officer rudely asked about Dadu Maharaj’s address. The person just pointed to a hut nearby while continuing his job. The officer considered it an insult that the laborer did not even salute him or talked to him.

He, therefore, shouted at that man using abusive language before proceeding in the direction shown. The officer reached Dadu Maharaj’s hut; there was no one in the house so he waited for a while. Suddenly he saw the same fellow entering the house holding the collected thorns and rubbish on his head.

He welcomed the officer saying that he is Dadu. The officer felt ashamed of shouting at the renowned saintly poet because of ignorance. He apologized for his abusive behavior. Dadu Maharaj said – “It is not your fault my child.

It is the ignorance of your prejudiced mentality, which discriminates between people on the basis of their caste or profession. Be that a laborer or king or anyone else, once you will learn to see the God existing in every being you will never utter a bad word against anybody; all your vices will vanish with the adoption of this attitude.”

Moral of The Story: Treat everyone with kindness and respect, even those who are rude to you – not because they are nice, but because you are.