Best Motivational Stories For Kids and Adults With Pictures

Motivational Stories For Kids and Adults: Stories are a great medium to learn anything in a speedy way and when it comes to imparting education to the children, a story proves to be one of the most effective mediums. Children can learn the various aspects of life through these motivational stories. 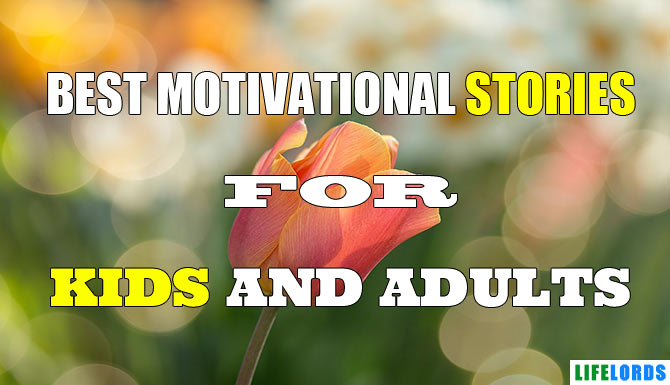 These stories can be used by parents, teachers, and children for storytelling sessions, role plays, moral education classes, school competitions, etc. We hope your kids will definitely enjoy these motivational stories. If you want more motivational stories for kids please visit our Story Section.

1. Motivational Story On Sharp Wit of The Great King Solomon

One day King Solomon was sitting on his throne, and his great men were standing around him. Suddenly the door was thrown open and the Queen of Sheba came in. “O King,” she said, “in my own country, far, far away, I have heard much about your power and glory, but much more about your wisdom. Men have told me that there is no riddle so cunning that you can not solve it. Is this true?”

“It is as you say, O Queen,” answered Solomon.

“Well, I have here a puzzle which I think will test your wisdom. Shall I show it to you?”

Then she held up in each hand a beautiful wreath of flowers. The wreaths were so nearly alike that none of those who were with the king could point out any difference.

Story of King Solomon And The Clever Queen

“One of these wreaths.” said the queen, “is made of flowers plucked from your garden. The other is made of artificial flowers, shaped and colored by a skillful artist. Now, tell me, O King, which is the true, and which is the false?”

The king, for once, was puzzled. He stroked his chin. He looked at the wreaths from every side. He frowned. He bit his lips.

“Which is the true?” the queen again asked.

Still, the king did not answer.

“I have heard that you are the wisest man in the world,” she said, “and surely this simple thing ought not to puzzle you.”

The king moved uneasily on his golden throne. His officers and great men shook their heads. Some would have smiled if they had dared.

“Look at the flowers carefully,” said the queen, “and let us have your answer.”

How Did King Solomon Solve The Riddle

So he said, “Open the window!”

It was opened. The queen was standing quite near to it with the two wreaths still in her hands. All eyes were turned to see why the king had said, “Open the window.”

The next moment two bees flew eagerly in. Then came another and another. All flew to the flowers in the queen’s right hand. Not one of the bees so much as looked at those in her left hand.

“O Queen of Sheba, the bees have given you my answer,” then said Solomon.

And the queen said, “You are wise, King Solomon. You gather knowledge from the little things which common men pass by unnoticed.”

King Solomon lived three thousand years ago. He built a great temple in Jerusalem and was famous for his wisdom.

Moral of The Story: An attentive mind can find the solution to every problem.

Motivational Stories That Will Teach A Lesson To Your Kids

2. The General and The Fox Motivational Story For Kids

There was once a famous Greek general whose name was Aristomenes. He was brave and wise, and his countrymen loved him. Once, however, in a great battle with the Spartans, his army was beaten and he was taken as prisoner. In those days, people had not learned to be kind to their enemies. In war, they were savage and cruel; for war always makes men so.

The Spartans hated Aristomenes. He had given them a great deal of trouble, and they wished to destroy him. On a mountain near their city, there was a narrow chasm or hole in the rocks. It was very deep, and there was no way to climb out of it. The Spartans said to one another, “Let us throw this fellow into the rocky chasm. Then we may be sure that he will never trouble us again.”

So a party of soldiers led him up into the mountain and placed him on the edge of the yawning hole in the rocks. “See the place to which we send all our enemies,” they said. And they threw him in. No one knows how he escaped being dashed to pieces. Some of the Greeks said that an eagle caught him in her beak and carried him unharmed to the bottom. But that is not likely.

I think that he must have fallen upon some bushes and vines that grew in some parts of the chasm. At any rate, he was not hurt much. He groped around in the dim light, but could not find any way of escape. The rocky walls surrounded him on every side. There was no place where he could set his foot to climb out.

How The General Came Out of The Cave

For three days he lay in his strange prison. He grew weak from hunger and thirst. He expected to die from starvation. Suddenly he was startled by a noise close by him. Something was moving among the rocks at the bottom of the chasm. He watched quietly and soon saw a large fox coming towards him.

He lay quite still till the animal was very near. Then he sprang up quickly and seized it by the tail. The frightened fox scampered away as fast as it could; and Aristomenes followed, clinging to its tail. It ran into a narrow cleft which he had not seen before, and then through a long, dark passage which was barely large enough for a man’s body.

Aristomenes held on. At last, he saw a ray of light far ahead of him. It was the sunlight streaming in at the entrance to the passage. But soon the way became too narrow for his body to pass through. What should he do? He let go of the fox, and it ran out. Then with great labor, he began to widen the passageway.

Here the rocks were smaller, and he soon loosened them enough to allow him to squeeze through. In a short time, he was free and in the open air. Some days after this the Spartans heard strange news: “Aristomenes is again at the head of the Greek army.” They could not believe it.

Moral of The Story: Never lose hope in tough times and always grab the nearest opportunity.

3. Do Every Work Wholeheartedly To Get Success

A small boy worked as an apprentice in a bicycle shop. A man sent a bicycle for repair. After repairing the bicycle, this boy cleaned up the bicycle and it looked like a new one. Other apprentices laughed at him for doing redundant work. The second day after the owner claimed the bicycle back; this boy was pinched and offered a job.

Moral of The Story: 1. Go the extra mile to be successful. 2. Doing more gains more and doing less loses more.

4. The Importance of Hard Work and Struggle In Life

The owner of a farm asked her child to work every day at the farm. His friend said to him: “You do not have to make your son work so hard. The crops would grow just as good.” The farm owner replied: “I am not cultivating my crops, but my child.”

Moral of The Story: 1. A simple way to groom a child is to let him experience some hardships. 2. If not cut, jade would not turn into useful ware.

A shop was always brightly lit up. Someone asked: “What brand of bulb are you using? It is so lasting.” The shop owner replied: “Our bulbs blew out frequently. We replaced them once a bulb blew out.”

Moral of The Story: 1. It is important to maintain brightness, change the bulbs regularly. 2. To brighten up everyday life: Endeavour to abandon unwholesome states of mind and make an effort to encourage wholesome states to grow.