Original Rapunzel Tangled Story For Kids With Pictures: The Story of the Rapunzel and The Witch is one of the most famous tales in Grimm’s Fairy Tales Book published in the year 1886. This tale has attracted the attention of most people in recent times. And most of its credit goes to Disney’s animated film ‘Tangled’. We hope your kids will certainly like this magnificent tale. 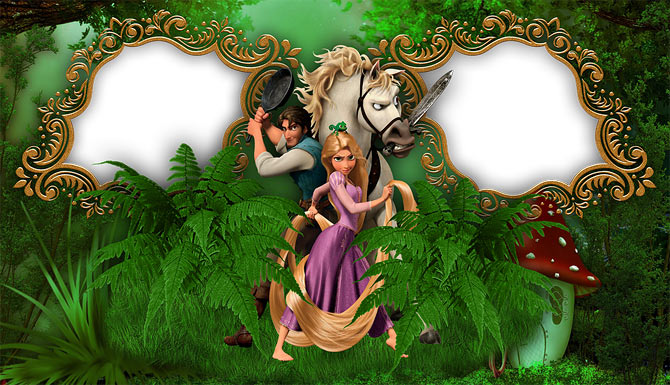 What Was The Greatest Wish of Rapunzel’s Mother

There were once a man and a woman who always wished for a child, but could not have one. At length, the woman hoped that God was about to grant her desire. These people had a little window at the back of their house from which a splendid garden could be seen. The garden was full of the most beautiful flowers and herbs. It was, however, surrounded by a high wall, and no one dared to go into it because it belonged to a witch, who had great power and was feared by all the world.

One day the woman was standing by the window and looking down into the garden when she saw a bed which was planted with the most beautiful rapunzel, and it looked so fresh and green that she longed for it. Soon it became her greatest wish to eat some and this desire increased every day. The woman knew that she could not get any of it and began to look more pale and miserable each day.

Then her husband was worried about her and asked “What ails you, my dear wife?”

“Ah,” she replied, “if I can’t eat some of the rapunzel, which is in the garden behind our house, I think I shall die.”

The man, who loved her, thought, “Sooner than let my lovely wife die, I will bring her some of the rapunzel myself, let it cost what it will.” In the twilight of the evening, he climbed over the wall into the garden of the witch, hastily grabbed a handful of rapunzel, and took it to his wife. She at once made herself a salad and ate it happily.

The Story of Rapunzel’s Parents & The Wicked Witch

She, however, liked it so much – so very much, that the next day she longed for it three times as much as before. If he was to have any rest, her husband must once more descend into the garden. In the gloom of evening, therefore, he let himself down again; but when he had climbed over the wall he was terribly afraid, for he saw the witch standing before him.

“How dare you,” she said with an angry look, “descend into my garden and steal my rapunzel like a thief? You shall suffer for this!”

“Ah,” the frightened husband answered, “please have mercy, I need the rapunzel for my lovely wife, who saw it from the window and felt such a longing for it that she would have died if she had not got some to eat.”

Then the witch allowed her anger to be softened, and said to him, “If this is true, I will allow you to take away with you as much as rapunzel as you will, only I make one condition. You must give me the child which your wife will bring into the world; it shall be well treated, and I will care for it like a mother.”

The man in his terror consented and when the baby was born the witch appeared at once, gave the child the name of Rapunzel, and took the baby girl away with her. Rapunzel grew into the most beautiful child under the sun. When she was twelve years old, the witch shut her into a tower, which lay in a forest.

The tower had no stairs or doors, but only a little window at the very top. When the witch wanted to go in, she stood beneath the window and cried, “Rapunzel, Rapunzel, Let down your hair!”

You May Also Like: 30 Short Poems For Kids of All Ages

Rapunzel had magnificent long hair that shone like gold, and when she heard the voice of the witch she would undo the fastening of the upper window, unbind the plaits of her hair, and let it down twenty ells below, and the witch climbed up by it. After they had lived thus for a few years it happened that as the King’s son was riding through the forest and came to the tower.

As he drew near he heard a song which was so sweet that he stood still and listened. This was Rapunzel who in her loneliness passed her time singing. The Prince wished to climb up to her and looked for the door of the tower, but none was to be found. So he rode home, but the song had so deeply touched his heart, that every day he went out into the forest and listened to it.

Once when he was standing behind a tree listening to Rapunzel’s song, he saw the witch come and heard how she cried, “Rapunzel, Rapunzel, Let down your hair.” Then he saw how Rapunzel let down her long tresses, and how the witch climbed up by it and went in to her.

“If that is the ladder by which one mounts, I will for once try my fortune,” thought the Prince, and the next day when it began to grow dark, he went to the tower and cried, “Rapunzel, Rapunzel, Let down your hair.”

Magical Story of Rapunzel And The Prince

Immediately the hair fell down and the Prince climbed up. At first, Rapunzel was terribly frightened when she saw that a man had come into her, for she had never seen one before; but the Prince began speaking so kindly to her, and told her that his heart had been so stirred by her singing that it had let him have no rest.

Then Rapunzel forgot her terror, and when he asked her if she would take him for her husband, and she saw that he was young and handsome, she thought to herself, ‘He will love me more than old Dame Gothel does, and she said yes, and put her hand into his hand.

She said, “I will willingly go away with you, but I do not know how to get down. Bring a bit of silk with you every time you come and I will weave a ladder with it. When that is ready I will climb down and we shall escape together.” They agreed that until that time he should come to her every evening, for the old woman came by day.

The witch knew nothing of this, until once Rapunzel said in her distraction, “Oh my Dame Gothel, you are so much heavier when you climb than the young Prince.”

“Ah! you wicked child” cried the witch “What do I hear thee say! I thought I had separated you from all the world but you have deceived me.”

You May Also Like: 10 Why Should We Hire You Answers You Must Know

Wonderful Love Story of Rapunzel And Prince With Images

How Witch Separates Rapunzel And Prince

In her anger, she seized Rapunzel by her beautiful hair, struck her several times with her left hand, seized a pair of scissors, and snip, snaps cut it all off. Rapunzel’s lovely braids lay on the ground but the witch was not through. She was so angry and pitiless that she took poor Rapunzel into a desert where she had to live in great grief and misery.

The same day on which she took Rapunzel away, the witch went back to the tower in the evening and fastened the braids of hair which she had cut off, to the hook of the window, and when the Prince came and cried, “Rapunzel, Rapunzel, Let down your hair,”

She let the hair down. The Prince climbed to the window, but instead of finding his dearest Rapunzel above, he found the witch, who gazed at him with wicked and venomous looks.

“Aha!” she cried mockingly, “You’ve come for your dearest Rapunzel but the beautiful bird sits no longer singing in the nest; the cat has got it and will scratch out your eyes as well. Rapunzel is banished and you will never see her again!”

How Rapunzel Finally Meets The Prince

The Prince was beside himself and in his despair, he fell down from the tower. He escaped with his life, but the thorns into which he fell pierced his eyes. Then he wandered quite blind about the forest, ate nothing but roots and berries, and did nothing but lament and weep over the loss of his dearest wife Rapunzel.

In this way, the Prince wandered several years in misery until at last, he came to the desert place where Rapunzel lived in wretchedness with her twin children that she had borne, a boy and a girl. He heard a voice singing and it seemed so familiar to him that he went towards it. When he approached, Rapunzel knew him and fell into his arms and wept.

Two of her tears fell on his eyes and they grew clear again, and the Prince could see with them as before. He led her to his kingdom where he was joyfully received, and they lived for a long time afterwards, happy and contented.

Note: Rapunzel is an old nickname for a herb with leaves like lettuce and roots like a radish. It is also called rampion.