The Original Story of Rumpelstiltskin For Kids

Rumpelstiltskin Bedtime Story To Entertain Kids: Once upon a time, in a country, a long way off, ran a fine stream of water; and upon the stream there stood a mill. The owner of the mill was a poor miller, who had a very beautiful daughter. She was, moreover, very shrewd and clever; and the miller was so proud of her. Now it happened that one day the king of the land, who used to come and hunt in the wood, met the miller by chance. 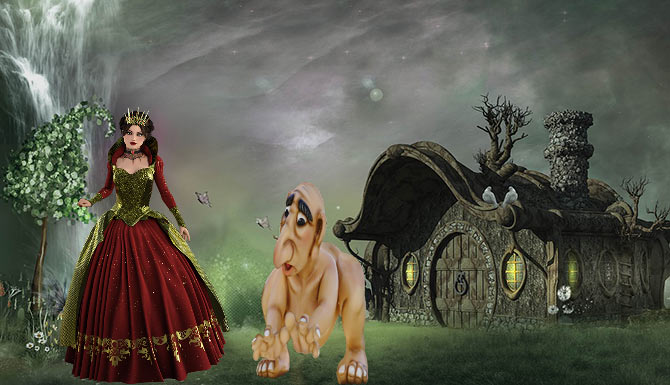 During the conversation, the miller, in order to appear a person of some importance, said to the king, “I have a daughter who can spin straw into gold.” The king was amazed by the statement of miller and it raised his greediness as he was very fond of money.

So the king said to the miller, “That’s a talent worth having, if your daughter is as clever as you say, bring her tomorrow to my palace, and I will put her to the test.”

Hearing the order of the king, the miller got frightened. As he had clearly told the lie just to catch the king’s attention. But what could be done now except follow the king’s order? So, the next day, he brought his daughter before the king in his palace.

The king was delighted with the girl’s demeanor and her beauty. But more than it, he was interested in examining her talents. So he led her into a chamber full of straw, gave her a spinning wheel and spindle, and said, “Now set to work and spin all night, and if by tomorrow morning early you have not spun this straw into gold, you must die.”

Read More Stories: 15 True Stories That You Will Never Forget In Life

What Happened With Miller’s Daughter When She Gets Trapped

Then he closed the door behind him and left her alone inside. The poor maiden sat down on the floor and said to herself, “Oh God, what should I do now? It was only a silly boast of my father. I have no idea how straw could be spun into gold? Certainly, tomorrow morning will be the last morning of my life. And she grew more and more frightened until at last, she began to weep.

Suddenly the door opened, and in stepped a tiny little man and said: “Good evening, Miss Miller-maid; why are you crying so bitterly?”

“Alas,” answered the girl, “I must spin all this straw into gold, and I do not know how to do it.”

“What will you give me if I spin it for you?” asked the dwarf.

“My necklace,” replied the girl.

The little man took the necklace, seated himself in front of the wheel, and whistled and sang:

‘Round about, round about,
Lo and behold!
Reel away, reel away,
Straw into gold!’

The Story of Rumpelstiltskin, Poor Girl And The Greedy King

The King Forced The Girl To Do The Task Again

By daybreak, the king was already there, and when he saw the gold he was astonished and delighted, but his heart became only more greedy after the precious metal. He had the miller’s daughter taken into another room full of straw, which was much bigger than the first, and commanded her, if she valued her life, spin it all into gold before the following morning.

The girl didn’t know what to do, and sat down once more to weep; then the door opened again, and the dwarf appeared and said: “What’ll you give me if I spin the straw into gold for you?”

“The ring on my finger,” answered the girl.

The dwarf took the ring, again began to turn the wheel, and whistled and sang:

‘Round about, round about,
Lo and behold!
Reel away, reel away,
Straw into gold!’

How The Miller’s Daughter Became The Queen of King

And by morning he had spun all the straw into glittering gold. The king rejoiced beyond measure at the sight, but his greed for gold was still not satisfied, and he had the miller’s daughter brought into a yet bigger room full of straw and said: “You must spin this, too, in the course of this night, but if you succeed this time you shall become my queen.”

“She’s only a miller’s daughter, it’s true,” the king thought; “but I couldn’t find a richer wife if I were to search the whole world over.”

As soon as the king left the room and she was alone the dwarf came in, and said, “What will you give me if I spin the straw for you once again?”

“I have nothing left that I could give,” answered the girl.

“Then promise me, if you should become queen, to give me your first child.”

“Who knows whether that will ever happen” thought the miller’s daughter, and, not knowing how else to help herself in this strait, she promised the dwarf what he demanded, and he set to work once more and spun the straw into gold.

When the King came in the morning and found everything as he had desired, he straightway made her his wife, and the pretty miller’s daughter really became a queen.

You May Also Like: How To Life Your Life To The Fullest With A Great Story

Weird Story of Rumpelstiltskin And The Queen With Images

What Was The Promise Made By Queen To Dwarf

When a year had passed a beautiful son was born to her. At the birth of her first child, she was so glad that she forgot the dwarf, and what she had said. But suddenly, one day he stepped into her room, where she was sitting playing with her baby. The dwarf said to the queen: “Now give me what you promised.”

The queen was horror-struck and offered the dwarf all the wealth of the kingdom if he would leave her the child. But the dwarf said, “No, a living creature is dearer to me than all the treasures in the world.”

Then the Queen began to cry and sob so bitterly that the dwarf was sorry for her, and said: “I’ll give you three days to guess my name, and if you find it out in that time you may keep your child.”

Then the Queen pondered the whole night over all the names she had ever heard, and sent a messenger over the country to inquire, far and wide, any names he could come across. When the dwarf came the next day, she began with Kasper, Melchior, Belshazzar, and said all the names she knew, one after another, but to everyone, the little man said, “That’s not my name.”

How The Queen Saved The Life of Her Little Child

On the second day, she sent an attendant to inquire about the names of all the people in the neighborhood and had a long list of the most uncommon and extraordinary names for the little man when he made his appearance. “Perhaps your name is Sheepshanks, Shortribs, Cruickshanks, Spindleshanks?” but he always replied: “Madam, that’s not my name.”

On the third day, one of the messengers came back and said: “I have not been able to find a single new name, but yesterday, as I was climbing a high hill, among the trees of the forest where the fox and the hare bid each other good night, I saw a little hut, and before the hut, a fire was burning, and round about the fire a funny little dwarf was dancing upon one leg, and singing:

“Merrily the feast I’ll make.
Today I’ll brew, tomorrow bake;
Merrily I’ll dance and sing,
For next day will a stranger bring.
Little does my royal dame
Rumpelstiltskin is my name!”

Finally, The Queen Find Out The Name of The Dwarf

You can’t imagine how glad the queen was when she heard the name. She sat down upon her throne and called all her court round to enjoy the fun. Shortly afterward, the dwarf stepped in and asked: “Now, my lady Queen, what is my name?”

Then the little man began to chuckle at the thought of having the poor child, to take home with him to his hut in the woods; and he cried out, ‘Now, lady, finally tell, what is my name?’

“Perhaps your name is Rumpelstiltskin?” said the queen slyly.

You May Also Like: The A To Z Secrets of My Success