The True Story of The Three Little Pigs & The Big Bad Wolf: The Three Little Pigs is a fable about three pigs who build three houses of different materials. A Big Bad Wolf blows down the first two pigs’ houses, made of straw and sticks respectively, but is unable to destroy the third pig’s house, made of bricks. Printed versions of this story date back to the 1840s, but the story itself is thought to be much older. 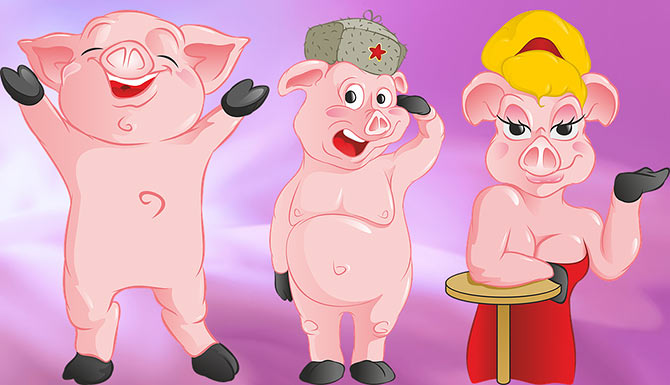 The phrases used in the story, and the various morals drawn from it, have become embedded in Western culture. Many versions of The Three Little Pigs have been recreated and modified over the years, sometimes making the wolf a kind character.

The earliest published version of the story is from Dartmoor in 1853 and has three little pixies in place of the pigs. We hope you will like this short but captivating story. Surely a wolf is a cunning animal but can the pigs outwit the wolf and live happily ever after? Find out the truth in this exciting version of a classic traditional tale.

Read More Stories: 15 Real Ghost Stories That Will Terrify You

Why The Three Little Pigs Left Their Mother’s House

Once upon a time, there were three little pigs, named Browny, Whitey, and Blacky. The pigs lived in a small house with their mommy and daddy but they have an ardent desire to see the wonders of this world. One day they left their mother and their home in order to seek their own fortunes and to build their own houses. Before they left, their mother told them “Whatever you do, do it the best that you can because that’s the way to get along in the world.

Browny, Whitey, and Blacky were very happy as for the first time in their life, they were really enjoying life. For three whole months, they roamed through the forests and fields, playing games and having fun. They made friends and spent their time gossiping and playing with them.

But as the winter drew to a close, they realized that now it was the time to prepare their homes for the chilly season so that they can keep them safe and warm through the winter. The three little pigs got busy gathering materials for their houses.

The first little pig Browny who was the oldest of the three decided to build his home out of straw. As he walked down the road, Browny met a farmer pulling a cart of straw. “It looked very warm – just right for building a home.” Browny thought for a moment and asked if he could have some.

Story of First Little Pig And His Encounter With Wolf

The farmer agreed and the first little pig began to build his house from straw. In no time at all, the little pig built his house. Then he sat down to eat his lunch of bread, tomato soup, and salad. Browny was living happily in his little home but one night, a big bad wolf, who dearly loved to eat fat little piggies, came walking along the road.

This big bad Wolf was Blitz who was notorious for his voraciousness. He saw the first little pig in his house of straw. With an evil glint in his eye, he knocked on the Browny’s door.

“No, no, by the hair on my chinny chin chin! I will not let you in!” said the frightened little pig.

“Then I will huff and I will puff, and I will blow your house down!” growled the wolf.

So the wolf inhaled deeply and his lungs filled up like two balloons. Then he huffed and he puffed and he blew the straw house down. He also blew the little pig down the street. Browny escaped and ran as fast as he could all the way to his brother’s house of sticks.

You May Also Like: 20 Short Poems About Death To Comfort Someone

Short Real Story of The Three Little Pigs With Images

The second little pig, Whitey was younger than Browny but didn’t like the idea to make a house just from the straw. In his opinion straw hut was too fragile and too cold during the winter. So he chose to build his house from sticks and searched for them. A little way down the road, Whitey saw a woodcutter with a cart of sticks.

“They looked thick and long – just right for building a house.” Whitey thought for a moment and asked if he could have some. The woodcutter agreed and the second little pig began to build his wooden house. It took Whitey three days to fasten his wooden home together. But this was a little bit stronger than a straw house.

After finishing the work Whitey looked at his house and said to himself, “Okay… it’s not the perfect one but will surely warm this winter. Browny laughed at Whitey and said, “You have wasted three whole days to build this clumsy stick house. Look, how much I have enjoyed this time.” Whitey didn’t say any word and went his way.

Suddenly, the big bad wolf came upon the second little pig’s house. He was searching for the Browny after his escape and when he found the Whitey’s house he was excited that he might get a chance to eat two little pigs. The little pig trembled as he told his brother about the wolf.

“Don’t worry, little brother,” said the second little pig. “Sticks are stronger than straw. Let’s go inside for some breakfast. The pigs were deep in conversation when they heard an angry knock on the door.

“No, no, by the hair on our chinny chin chin! We will not let you in!” the two little pigs called back.

“Then I will huff and I will puff, and I will blow your house down!” growled the wolf.

Again the wolf inhaled deeply. Then he huffed and he puffed and he blew the wooden house down. He also blew the little pigs down the way. They rolled like two pink balls. Browny and Whitey escaped and raced to their brother’s house of bricks.

You May Also Like: 16 Job Interview Tips & Tricks For Job Seekers

The third little pig, Blacky was the youngest but the smartest of all the three pigs. Like his elder brothers, he also loved to play and sing. But he always remembered what his mother had taught him growing up, “Whatever you do, do it the best that you can because that’s the way to get along in the world.”

Blacky sighed and thought, “Mom was right. Obviously, it will take time, patience, and hard work to build a safe, warm, and comfortable home. The house made from straw and wood is not strong enough to stand up to wind, rain, and snow. Also, the cold night air could creep in quickly.

So Blacky studied a lot and finally decided that a house of bricks would be the best choice. He trotted down the road in search of supplies. After a short time, he met a builder pushing a wheelbarrow full of bricks. The third little pig thought to himself, “How strong those bricks look! I think they would make an excellent house.”

So, the third little pig asked the builder for some of his bricks and he began to build a house that was stronger and bigger than the others. Soon, Blacky had a house of his own and he was very happy. He was hanging a Welcome sign when his younger brothers rolled onto his front step.

The pigs sobbed as they told their younger brother about the wolf. “Let’s see the wolf blow down this house,” said the third little pig. “Come inside for tea and snacks. You will feel better.” The wolf was soon at the brick house. He knocked on the door and began to shout, “Little pigs, little pigs, let me come in!” he growled.

“No, no, by the hair on our chinny chin chin! We will not let you in!” the three little pigs shouted back.

“Then I will huff and I will puff, and I will blow your house down!” roared the wolf in his loudest voice.

How Little Pigs Saved Themselves From The Wolf

They figured out that he would come down the chimney, so they lit a roaring fire in the fireplace and placed on it a large kettle of water. When the wolf finally found the hole in the chimney he crawled down but he fell straight into the pot of boiling water!