“Success is counted sweetest” is a lyric poem written by American poet Emily Dickinson in1859. It was first published anonymously in the Brooklyn Daily Union on April 27, 1864. The poem uses the images of a victorious army and one dying warrior to suggest that only one who has suffered defeat can understand success. 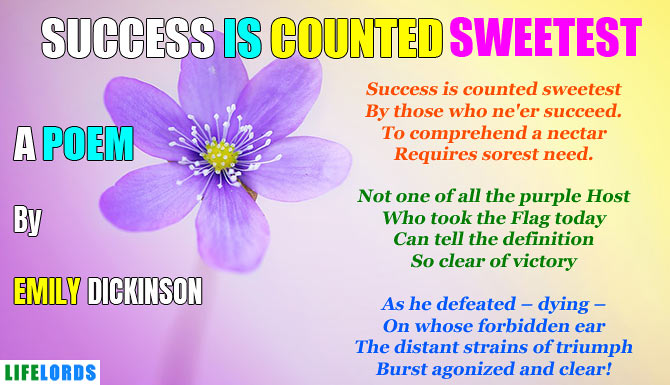 The poem’s three unemotional quatrains are written in iambic trimeter with only line 5 in iambic tetrameter. The rhyme scheme is ‘abcb’. “Success is counted” was one of Dickinson’s earliest manuscript poems and one of only seven poems published during her lifetime.

A Poem on Success By Emily Dickinson

Success is counted sweetest
By those who ne’er succeed.
To comprehend a nectar
Requires sorest need.

As he defeated – dying –
On whose forbidden ear
The distant strains of triumph
Burst agonized and clear!

What Is The Meaning of This Poem

This poem argues that “Success” is valued most by those who have it least. In other words, success is most valued and best appreciated by those who never have it. In real life, too, it has been seen that people who always fail are the ones who appreciate success the most. To truly value something sweet like success, you have to really, really need it.

In this sense, success is a kind of a paradox: the more successful you are, the less you appreciate that success, and vice versa. The desire for success is thus strongest in those who need it most—like the dying soldier who can hear the celebrations of his enemies. To this dying soldier’s ears, the distant sounds of celebration ring out painfully clear.