What Is The Definition of Leadership And Who Is A Leader

“The challenge of leadership is to be strong, but not rude; be kind, but not weak; be bold, but not bully; be thoughtful, but not lazy; be humble, but not timid; be proud, but not arrogant; have humor but without folly.” 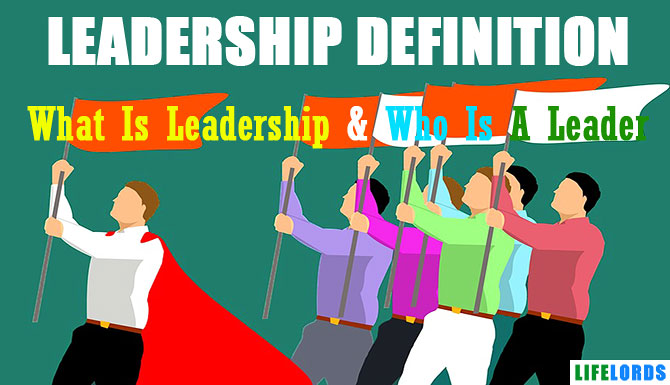 What Is The Definition of Leadership: Leadership is both a research area and a practical skill encompassing the ability of an individual or organization to “lead” or guide other individuals, teams, or entire organizations. It can be perceived as a particularly emotion-laden process, with emotions entwined with the social influence process. Most theories in the 20th century argued that great leaders were born, not made.

Current studies have indicated that leadership is much more complex and cannot be boiled down to a few key traits of an individual. Years of observation and study have indicated that one such trait or a set of traits does not make an extraordinary leader.

What scholars have been able to arrive at is that leadership traits of an individual do not change from situation to situation; such traits include intelligence, assertiveness, or physical attractiveness.

What Is The Definition of Leadership

There is no single definition of Leadership that is universally acceptable. However, in most cases, Leadership is defined as one’s ability to get others to willingly follow, towards the achievement of a common goal. Carly Fiorina, former chairman and CEO of Hewlett-Packard says – “Leadership is not about title, position, or power. It’s about solving problems and unlocking the potential in those around us.”

A leader is a person who influences a group of people towards a specific result. It is not dependent on title or formal authority. Here we will try to understand ‘What Leadership Actually Is’ with the insightful thoughts of those renowned personalities who are considered authority on this topic.

“Leadership is a matter of intelligence, trustworthiness, humaneness, courage, and discipline… Reliance on intelligence alone results in rebelliousness. Exercise of humaneness alone results in weakness. Fixation on trust results in folly. Dependence on the strength of courage results in violence. Excessive discipline and sternness in command result in cruelty. When one has all five virtues together, each appropriate to its function, then one can be a leader.”

“Leadership consists not in degrees of technique but in traits of character; it requires moral rather than physical or intellectual effort, and it imposes on both leader and follower alike the burdens of self-restraint.”

“Good leadership consists of showing average people how to do the work of superior people.”

Difference Between A Leader and A Boss

Every organization needs leaders at every level. Many people think that the terms ‘Leader’ and ‘Boss’ can be used interchangeably, but they’re not the same. Klaus Balkenhol clarifies the difference in these words –

“There is a difference between being a leader and being a boss. Both are based on authority. A boss demands blind obedience; a leader earns his authority through understanding and trust.”

Another difference between Leaders and Boss is that leaders emphasize innovation above all else. Whereas a Boss seeks to inspire his team to meet goals without giving much emphasis to innovation and creativity. Leadership requires traits that extend beyond management duties.

Leaders are recognized by their capacity for caring for others, clear communication, and a commitment to persist. Leaders who demonstrate persistence, tenacity, determination, and synergistic communication skills will bring out the same qualities in their groups.

A good leader uses his own inner mentors to energize his team and organizations and lead a team to achieve success. But a toxic leader is someone who has responsibility for a group of people or an organization, and who abuses the leader-follower relationship by leaving the group or organization in a worse-off condition than when he/she joined it.

What Are The Signs of An Outstanding Leadership

25 Essential Qualities of A True Leader

1. A true leader has the vision and conviction that a dream can be achieved. He inspires the power and energy to get it done.

2. A true leader is a humble, generous and amiable person, who has a loving and compassionate heart towards all beings.

3. A true leader is a highly self-confident person, who has a firm belief in his capabilities, but who is not an egotist.

4. A true leader knows the value of time, respects its sanctity, and is strict in the timely execution of assigned tasks.

5. A true leader lives an organized, balanced, and disciplined life and inspires his people to live as well.

6. A true leader is a great open-minded visionary who has the foresight to deal with any situation.

7. A true leader infuses enthusiasm, courage, hope, and confidence in his people.

8. A true leader focuses on his people’s strengths and not on their weaknesses.

10. A true leader has the passion to inspire and power to lead the people.

11. A true leader is always respected, loved, and trusted by his people.

12. A true leader is an honest, upright, simple, and fearless person.

Do You Know Who Is A True Leader

13. A true leader searches hard for desirable circumstances and if he does not find them then makes them favorable.

14. A true leader is humorous and joyous at times as he knows his mood affects everyone in his companionship.

15. A true leader raises the aspirations of his followers and enthuses people with a desire to reach the stars.

16. A true leader has no self-interest and gives himself wholeheartedly for the welfare of his people.

17. A true leader never loses his courage and tranquility of mind even amidst the toughest situations.

18. A true leader learns from other man’s mistakes and is always involved in goal achieving tasks.

19. A true leader has deep faith in his ideals and principles and never compromises for them.

20. A true leader is equipped with a never-say-die attitude and unflinching enthusiasm.

21. A true leader is an optimist who sees opportunities in every risk and failure.

22. A true leader has excellent self-control over his mind, body, and senses.

23. A true leader is a determined, dedicated, and patient person.

24. A true leader has firm faith and belief in God.

25. A true leader is, in essence, a True Winner who on one hand is born to lead the people and on other hand is destined to serve mankind.

Leadership Skill Is Essential For Every Leader

Leadership skill is one of the most sought after by employers as this soft skill is an indispensable need for every leader in the modern corporate world. That’s the reason why large companies and organizations are spending huge money every year on leadership education.

According to Trainingindustry.com, in 2015, global expenditure on the training of employees was a whopping $356 billion and in coming years it is expected to cross $500 billion. This figure is enough to indicate what is the importance of Leadership in today’s business world.

“There go the people; I must follow them; for I am their Leader.”