Why You Are Never Too Old To Accomplish Your Dreams

“Successful and unsuccessful people do not vary greatly in their abilities. They vary in their desires to reach their potential.” 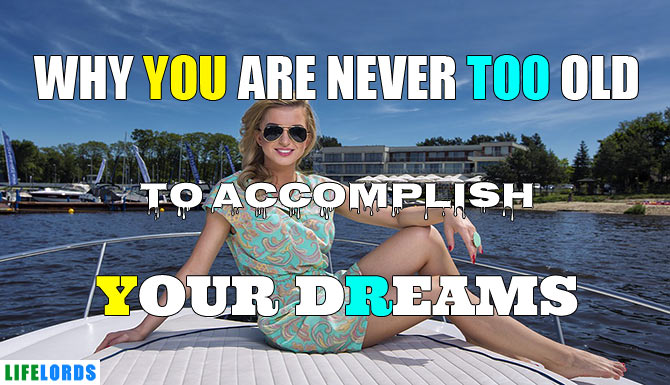 Why You Are Never Too Old To Accomplish Your Dreams: Everybody wants to get success and that too as early as possible but what if we got no success after many efforts. In that situation, should we dump our efforts to get success? It is true that many people come to this world with special talents.

That’s why they get success at a very young age. But remember age has nothing to do with success. You have every right to fulfill your dreams at any age. With this article we want you to tell only one thing that there is no age to get success.

No matter how old you are now. You are never too young or too old for success or going after what you want. Here’s a shortlist of people who accomplished great things at different ages against many odds…

Believe It Or Not But Getting Success Is Your Birth Right

2. Helen Keller became deaf & blind at the age of 19 months. But that didn’t stop her to go forward. She was the first deaf-blind person to earn a Bachelor of Arts degree.

3. Mozart was already competent on keyboard & violin, he composed from the age of 5.

4. Shirley Temple was 6 when she became a movie star on “Bright Eyes.

5. Anne Frank was 12 when she wrote the diary of Anne Frank.

6. Magnus Carlsen became a chess Grandmaster at the age of 13 years.

15. John Keats was only 23 years old when he finished one of the most famous collections of poems in the history of Poetry.

16. The great Indian revolutionary Sardar Bhagat Singh was martyred at the young age of 23.

18. Roger Bannister was 25 When he broke the 4-minute mile record.

19. Albert Einstein was only 26 years old when he discovered the special theory of relativity.

20. Albert Einstein was 26 when he wrote the theory of relativity.

21. Lance E Armstrong was 27 when he won the tour de France.

22. Michelangelo created the two of the greatest sculptures “David” and “Pieta” by age 28.

23. Alexander the Great by age 29, had created one of the largest empires of the ancient world.

24. J. K. Rowling was 30 years old when she finished the first manuscript for Harry Potter.

List of The People Who Made A Difference In This World

There Is Nothing Impossible To Him Who Will Try

25. Great saint and the maker of modern India, Swami Vivekananda was only 30 years old when he delivered his famous speech in First World’s Parliament of Religions in Chicago.

26. Amelia Earhart was 31 years old when she became the first woman to fly solo across the Atlantic Ocean.

27. Oprah Winfrey was 32 when she started her talk show, which has become the highest-rated program of its kind.

28. Famous Scientist Thomas Alva Edison invented the electric bulb at the age of 32.

29. Edmund Hillary was 33 when he became the first man to reach Mount Everest, the highest mountain in the world.

31. Marie Curie was 35 years old when she got nominated for Nobel Prize in Physics 1903.

32. Napoleon Bonaparte became the emperor of France at the age of 35. He was also the youngest general of the army at the age of 24.

34. Vincent Van Gogh was 37 when he died & virtually unknown yet his paintings today are worth millions of dollars.

35. Neil Armstrong was 38 when he became the first man to set foot on the moon.

Why You Are Never Too Old To Fulfill Your Dreams

36. The great Indian Freedom Fighter, Subhash Chandra Bose was only years 40 years old when he was elected the president of the Indian National Congress.

38. Harriet Beecher Stow wrote her world-famous novel ‘Uncle Tom’s Cabin’ at the age of 41 while performing her household duties regularly.

39. Christopher Columbus was 41 when he landed in the New World (Americas).

40. Rosa Parks was 42 when she refused to obey the bus driver’s order to give up her seat to make room for a white passenger.

41. John F. Kennedy was 43years when he became President of the United States.

42. At age 44, Marie Curie won the Nobel Prize in chemistry.

44. Suzanne Collins was 46 when she wrote “The Hunger Games”.

46. Charles Darwin was 50 years old when his book on the “Origin of Species” published.

47. Leonardo Da Vinci was 51 years old when he painted the Mona Lisa.

48. Abraham Lincoln was 52 when he became president.

50. Ray Kroc Was 53 when he bought the McDonalds Franchise and took it to unprecedented levels.

53. At age 57, Annie Peck climbed Mount Huascaran in the Andes. She was the first person to reach the top.

Think Again If You Consider Yourself Unlucky Or Incompetent

54. Chesley “Sully” Sullenberger III was 57 years old when he successfully ditched US Airways Flight 1549, in the Hudson River in, 2009. All of the 155 passengers aboard the aircraft survived.

56. Colonel Harland Sanders was 61 when he started the KFC Franchise.

58. At age 63, Francis Galton revealed to the world that no two people have the same fingerprints and revolutionized crime-fighting in the process.

61. Ronald Reagan was 69 when he became the President of the United States.

65. Nelson Mandela was 76 When he became the President of South Africa.

66. Joseph R. Biden was 77 years old when he became the 46th president of the United States.

71. Fauja Singh astonished the world by running a marathon at the age of 100. The British runner completed the 26.2-mile Toronto Waterfront course in eight hours, 25 minutes, and 16 seconds.

Keep the clock Going…It’s never too late for doing anything!!

Source: Some Points that have appeared in this post are authored by writer ‘Pablo’ while others are searched and published by the Lifelords Team.