The Story of Cain And Abel In The Bible For Kids

Cain And Abel Story In The Bible For Kids: Adam was the first man created by God almighty and Eve was the first woman who, later became Adam’s wife. They lived in a beautiful garden in paradise called Eden. It was filled with beautiful trees and flowers of all kinds. But they did not live in Eden long for they did not obey God’s command. They ate the fruit of a tree which had been forbidden them. 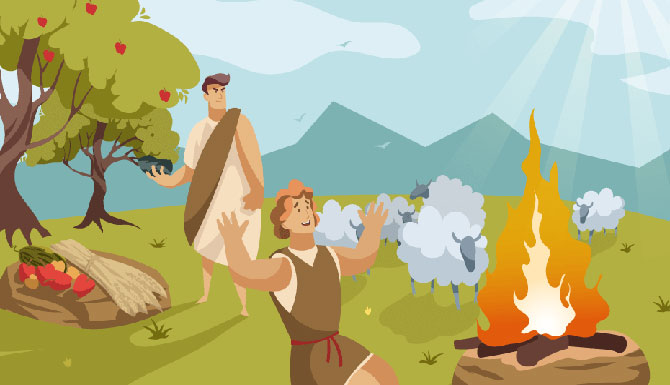 So they were driven forth by an angel and had to give up their beautiful home. Adam and his wife went out into the world to live and work. For a time they were all alone, but after a while, God gave them a little child of their own, the first baby that ever came into the world.

Eve named him Cain, and after a time another baby came, whom she named Abel. When the two boys grew up, they worked, as their father worked before them. Cain, the elder brother, became a farmer as he chose to work in the fields and to raise grain and fruits. Abel, the younger brother, had a flock of sheep and became a herdsman.

Why Cain And Abel Offered Their Gifts To God On Alter

While Adam and Eve were living in the Garden of Eden, they could talk with God and hear God’s voice speaking to them. But now that they were out in the world, they could no longer talk with God freely, as before. So when they came to God, they built an altar of stones heaped up, and upon it, they laid something as a gift to God and burned it.

All this practice was to show that it was not their own but was given to God, whom they could not see. Then before the altar they made their prayer to God and asked God to forgive their sins, all that they had done was wrong, and prayed to God to bless them and do good to them.

In the same manner, the twin children of Adam and Eve, Cain and Abel, offered upon the altar to God his own gift. Cain brought the fruits and the grain which he had grown while Abel brought a lamb from his flock, killed it, and burned it upon the altar.

The Story of Adam And Eve’s Children: Cain And Abel

Why God Was Not Pleased With Abel’s Brother Cain

But Cain, instead of being sorry for his sin, and asking God to forgive him, was very angry with God, and angry also toward his brother Abel.

When Cain showed displeasure God said, “Cain, why are you angry? If you simply do what’s right, you’ll be accepted and happy. But if you don’t, sin is waiting for you.”

A few days later, Cain and Abel were working out in a field. Cain suddenly turned and attacked his brother and killed him. So the first baby in the world grew up to be the murderer of his own brother.

And Cain answered, “I do not know; why should I take care of my brother?”

How God Punished Cain When He Murdered Abel

As long as you live, you shall be under God’s curse for the murder of your brother. You’ll continue to work in the field, but it’ll no longer respond to you and give you its best. You’ll become a restless wanderer over the earth, and shall never find a home because you have done this wicked deed.”

Cain fell down and cried out. “Oh God, your punishment is too severe! You’re taking away my land and your presence! I’ll be aimless and separated from everyone else. If any man finds me he will kill me, because I shall be alone, and no one will be my friend.”

And God said to Cain, “If anyone harms Cain, he shall be punished for it.” And the Lord God placed a mark on Cain so that whoever met him should know him and should know also that God had forbidden any man to harm him.

Then Cain and his wife went away from Adam’s home to live in a place by themselves, and there they had children. And Cain’s family built a city in that land; and Cain named the city after his first child, whom he had called Enoch.