The Ant And The Grasshopper Story For Class 1 Students

The Ant And The Grasshopper Story: This story is undoubtedly one of the most favorite moral stories children like to read and listen to. This bedtime story originates from the famous Aesop’s fables. As everyone knows Aesop was a wise slave who was appointed to educate the mischievous princes of the Sultan.

Aesop, by employing his amazing tales, got succeeded in making children more civilized and disciplined. Hundreds of years have passed since then, but the moral, this story conveys is not changed however there have been numerous versions of this wonderful tale over all these years. Let’s start the story. 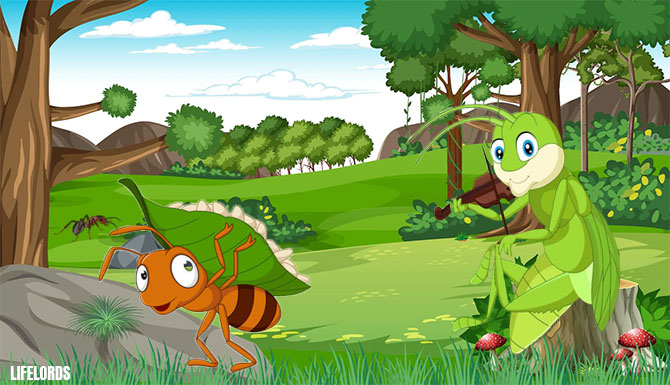 Famous Aesop Tale: The Ant And The Grasshopper Story

Once upon a time, there was an ant and a grasshopper who lived nearby each other in a small forest. The ant was a hard-working creature so it was always busy with other ants to arrange the food and other daily needs for its family. The grasshopper on the other hand was lazy and a bit careless too. It usually, ate whatever it found for that day.

The grasshopper has only one motto – always enjoy the present moment. So it never cared about the future and spend its time just roaming here and there uselessly. It was a hot summer afternoon when the grasshopper was sitting lazily on the branch of a small tree. It was hopping about, chirping, and singing to its heart’s content.

Grasshopper was so engrossed in its singing that it was completely unaware of the outer world. Suddenly an interesting incident attracted its attention. It saw the ant passing by the tree. The ant was carrying the ear of corn to the anthill with great toil.

What Lazy Grasshopper Said To The Hard Working Ant

The lazy grasshopper sees the ant and says, “Oh you foolish ant! Why do you work so hard all the time? See your size and compare your weight. Don’t you think you are wasting your whole life behind these grains? Why not come and chat with me, instead of toiling and moiling in that way?”

Hearing the grasshopper’s futile chat, the ant smiled and replied, “Hey grasshopper, I am already enjoying my work. I am saving the food for the coming winter as it would be very difficult to find any food outside. You should also save some food for the harsh season else you will die hungry.”

Saying that the ant walked away. After some days, the grasshopper again mocked the ant for his hard-working nature and said, “Oh you petty creature, “Why don’t you join me today? We’ll sing, dance and enjoy ourselves. Come on, let’s play together.”

But the wise ant replied sternly, “Look Mr. grasshopper, I don’t have spare time to chat with you. Winter is about to come and I have to store food for the whole season.”

The Grasshopper said, “Why bother about the winter? We have got plenty of food at present. This is the time to enjoy and have fun. Don’t sweat out all the time.”

The Complete Story of The Ant And The Grasshopper

What Happened With Grasshopper When It Had No Food

But the Ant went on its way and continued its toil as it knows it was pointless talking to the lazy grasshopper. Days and months passed on like this. When the winter came the Grasshopper had no food and found itself dying of hunger, while it saw the ants distributing everyday corn and grain from the stores they had collected in the summer.

The grasshopper was just hopping from one place to another in search of food. But no food was available in that season. When the grasshopper could not bear the hunger anymore it decided to visit the ant’s house for help. For the grasshopper knew that the ant had saved enough food for the winter.

The grasshopper went to the anthill and knocked at the door. The ant opened the door and was surprised to see the grasshopper. The ant wished it and said, “Oh grasshopper, welcome to my tiny house. How can I help you? You look so pale. Is everything alright?”

The grasshopper said, “Dear Ant, I have been starving. Please spare me some food from your stock.”

The Grasshopper Learnt A Great Lesson In A Hard Way

The ant understood the situation of the grasshopper and said, “I’ll happily give you the food but may I ask one question, please? What were you doing in the summer?”

The grasshopper said with a heavy heart, “I was singing and chirping.”

“Then, why don’t you sing and chirp anymore?” said the ant.

“I am sorry, dear ant. I admit my mistake. You warned me about the same but I was ignorant. Now I promise I will work hard like you in the next season.” said the grasshopper.

“Take this food, Mr. grasshopper. But I am sorry I won’t be able to give you more, or else we will have to starve.” said the ant.

The grasshopper felt very thankful to the ant and went its way. It realized its mistake of not working hard and planning for the future. From the next summer onwards, the grasshopper too joined the ant.

Moral of The Story: Work hard and plan for the future. It is best to prepare for the days of necessity.

We hope you enjoyed the bedtime story of the ant and the grasshopper. Telling this story to your children not only entertains them but also teaches some important moral lessons to future generations. And one unique point about this story is – it teaches morals in the simplest and most engaging way as the main characters are insects that kids see in everyday life.